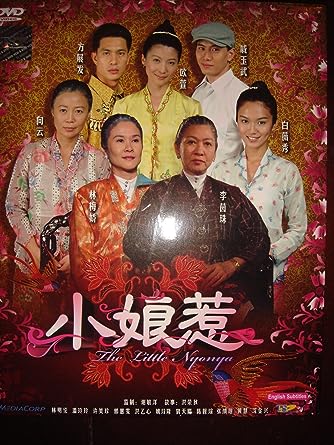 You can purchase the DVDs from : Amazon.com | Ebay Australia

A story that spans several decades, it tells the life of a pretty little Nyonya who is skilled in Peranakan, also known as straits chinese, cooking, sewing. Growing up in a traditional family, she is discriminated against as the granddaughter of a lowly second wife, a situation made worse by her mother’s disapproved union with a Japanese photographer. Her beauty and kindness attracted the attention of many suitors, but incur the jealousy of her cousins.

The Little Nyonya (Chinese: 小娘惹) is a 2008 drama serial on Singapore’s free-to-air MediaCorp TV Channel 8. It stars Jeanette Aw, Qi Yuwu, Pierre Png, Joanne Peh and Xiang Yun as the casts of the series. The storyline, which circles around the biographical flashback of an extended Peranakan family in Malacca, is set in the 1930s and spans to over 70 years and several generations of three families.

It debuted on November 25, 2008 and concluded its run on January 5, 2009. It was shown on weekdays at 9pm. The series was partly sponsored by the Media Development Authority of Singapore.

Produced by MediaCorp in commemoration of the channel’s 45-year anniversary (45载光芒·8方贺台庆), the series has been acclaimed by viewers and critics, and raked the highest viewership in the country in 14 years. The success of The Little Nyonya has led to the show being broadcast internationally. The series became the first ever Singaporean Chinese drama to be dubbed in Malay and aired on Malay-language channel Suria.

Story line: Hailed as “Singapore’s Dae Jang Geum“, 2008 drama The Little Nyonya is the 45th-anniversary celebration production for MediaCorp TV. A rare big-budget production for Singapore television, the government-sponsored series took two years to produce, and the efforts were rewarded with the highest ratings in the last decade, as well as 10 awards in the Star Awards 2009, including Best Drama Serial, Director, Screenplay, Actress, Newcomer, Editing, and Theme Song.

Written by Ang Eng Tee and directed by Zhang Rongmin, the 34-episode drama serial depicts the life of the Peranakan and their ethnic culture. Peranakan (or “Baba-Nyonya”) refers to the descendents of early Chinese immigrants in Malaysia, Singapore, and Indonesia, where “Baba” means men and “Nyonya” women. The storyline spans over 70 years from the 1930s to the present day, involving four generations of a big family portrayed by popular actors like Qi Yuwu (Painted Skin), Jeanette Aw (Rhythm of Life), Joanne Peh, Pierre Png, Yao Wenlong, and Lin Meijiao.

The deaf and mute Juxiang (Jeanette Aw) is a mistress in a large Peranakan family, who flees from home to marry a Japanese photographer named Yamamoto Yousuke (Dai Yang Tian). After their deaths during World War II, their beautiful daughter Yueniang (also Jeanette Aw) stays with her grandmother (Xiang Yun), who teaches her the fine Peranakan art of cooking and sewing. Yueniang’s beauty and culinary skills soon attract many rich suitors, but she only has eyes for Chen Xi (Qi Yuwu), a penniless driver…

There are no reviews yet.

Be the first to review “The Little Nyonya Drama Dvd” Cancel reply
Please register to get your referral link.

For each friend you invite, we will send you a coupon code worth $5.95 that you can use to purchase or get a discount on any product on our site. Get started now, by sharing your referral link with your friends.